Inspired by my parent’s traditional Christmas letter, in 1985 I began a holiday tradition of my own, creating original holiday pieces to share with my friends and family. Sometimes these have been woodcuts or poems or die cut cards … but my favorite pieces (not surprisingly) have been comics!

For most of the past decade, these pieces have centered around Watusi the talking dog and his supporting cast from my weekly adventure strip (new each Wednesday at www.watusithetalkingdog.com), often tying into the storyline then running in it:

Hapless hot dog vendor “Flamin’ Frank” (1999) was a character I used frequently before Watusi came along. Sadly, much of what would have been his supporting cast has been co-oped by Watusi, too! The original version of this comic came singed as my way of wishing readers “all the warmth of this holiday season.”

Likely my favorite holiday comic– certainly the most elaborate– is 2000’s “Three Wise Men”. Adapting my favorite part of the Nativity story, I did research into King Herod and the historical period, gaining new respect for the Magi in the process. Kings in their own right, they were crossing into the kingdom of a ruler beset with illness (Jewish historian Josephus described him as “suffering from uncontrollable itching, coughing, fever and worms”), haunted by the spirits of the wife and children he’d already murdered, and allied with the powerful Roman Empire. These men put their own lives on the line, all to pay homage to a newborn baby. It certainly gave me a new sense of their bravery and what a powerful effect that star had for them.

I hope you enjoy these comics with my best wishes for the season; they’re available in two formats:

But, for those of you who read to the end of this post, you can get a .pdf copy for FREE! As 2016 winds down, I’m conducting a survey to better understand my readers, their reading habits and interests, and their thoughts on my comic. I hope you’ll take a moment to share your thoughts (survey starts here); complete the survey before the end of the year, and you get a code for a FREE copy of Festive Funnies. Thanks for your help!

I’m gearing up for my appearance this weekend at Wichita’s Air Capital Comiccon and I’ll be bringing a new comic (in addition to my “Watusi and the Emerald Serpent” roadshow) along with me. Well, maybe “new” isn’t quite the right word; here’s the story behind it…

The Smeary Soapbox Press-ents 100-Page Inventory Closeout Super Spectacular is my way of thinning out my backstock in a way that also pays homage to DC’s 100 Page Super Spectaculars of the early 1970s. Assembled from extra copies of my one-shot comics, each copy has its own unique mix of content (although I did make sure they each contained the characters mentioned on the cover: Watusi, Flamin’ Frank, FooF!, Professor Harvey, and the Guy with a Hammer!), as well as an original convention sketch. Given that nature of this collection, the material included varies, ranging from just a few years ago back to my earliest days as a self-publisher in the 1980s! The mix could include a sampling of my earliest superhero parody comics, a smattering of the annual holiday comics I’ve made since 1985, one-off comic “singles”, and/or comics featuring Watusi and his costars. The drawings may be rough, the stories may be silly, and they may even take me down a path I ultimately decided not to follow. But many of these comics are work I’m still proud of, if for no other reason than they led me to become the creator I am today.

I had fun “curating” the material that went into these copies, and I think my binding comes pretty close to capturing the feel of those great old 100-pagers. Check it out if you’re able to make it to the Air Capital Comiccon– I hope to see you there! But if you can’t make it, here’s a selection of some of the better sketches that ended up in the copies… 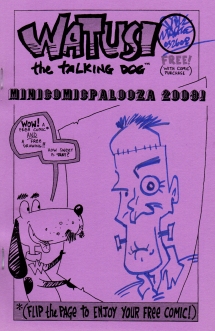 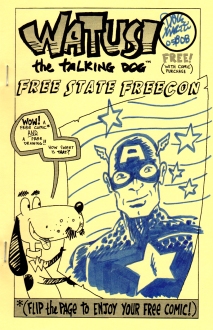 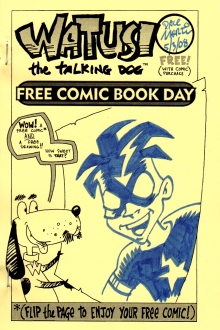 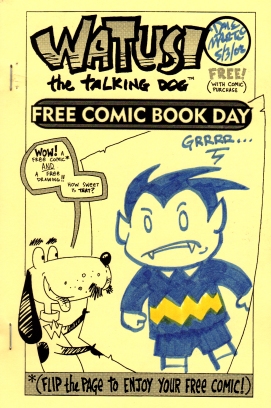 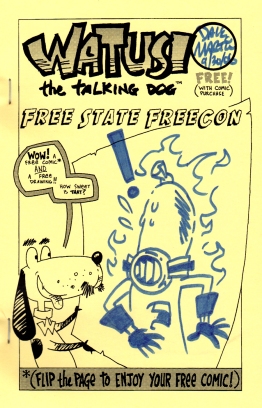