I can’t recall when I first discovered the art of Peter Kuper (probably an early ’90s issue of World War 3 Illustrated or his adaptation of The Jungle), but I was immediately drawn to both his graphic style– a combination of scratchboard and stencils– and his sharp political commentary. I’ve enjoyed his work ever since, and his ability to convey a story with few (or often no) words made him a natural fit for Mad magazine’s “Spy vs. Spy”, a strip he’s drawn for nearly 20 years.

So, naturally, I was predisposed to enjoy his latest book, Ruins (Self-Made Hero, 2015). What surprised me, though, were the nuanced characterizations of his protagonists, New Yorkers Samantha and George. They are not merely ciphers, but fully realized characters. The story details their time spent during Samantha’s sabbatical year in Oaxaca, Mexico, their strained relationship, and the violent suppression of the local teachers’ trade union strike there in 2006. Their story is paired with the migration of a monarch butterfly from New York to Oaxaca, which gives Kuper a chance to touch upon additional issues of social and ecological damage. He has a lot to say in this book and he says is well. It’s an engrossing read, and he brings an admirable mix of illustration styles to its pages. It may well be my favorite work by him yet, and he takes full advantage of the scope of his vision.

In addition to the mix of illustration styles, Kuper also gives each of his main characters a distinctive speech bubble and lettering style that mirrors their personality. This technique, which too often comes off as a distracting trick, works well here, likely due to the mix of drawing styles already at play in the book. David Mazzucchelli did something similar in his Eisner and Harvey Award-winning book Asterios Polyp (Pantheon, 2009), another highly recommended read that is both a visual treat and an intriguing character study. In fact, one of the Eisners it won in 2010 was for his lettering.

So why, then, does this technique bother me so much when I encounter it in mainstream comics? I’m thinking particularly of the lettering in Marvel’s Avengers and Fantastic Four circa 1998 (the “Heroes Return” era): Thor had a Norse-evoking typeface, the Human Torch had a flaming speech bubble with red type, and the Thing spoke in chunky letterforms. Looking back on it in comparison to Ruins and Asterios Polyp, perhaps I found it such a distraction because they were applying such different speech lettering when there was not an accompanying variety of artwork within the story. Or perhaps it just turned me off because it became obvious that hand lettering had been cast out, and such tricks as transparent bubbles with gray type came to be used for “whisper”, instead of the dashed bubbles that had been its clearly-recognized sign for decades. Even though tricks like that, and the often-used choice to letter with a smaller type size rather than letter around the artwork, often caused readability to suffer as a result. But perhaps I’m being too hard on the Comicraft letterers making those early forays into digital lettering: after all, it wasn’t too many years later that Todd Klein proved one could produce subtle digital lettering in books like Tom Strong and Promethea. It just serves as a reminder to cartoonists at all levels that proper lettering is a skill that takes more attention to detail than simple typesetting.

I’ve employed digital lettering in my own comics over the years, but found myself tweaking it a fair amount in the production stage to get the look I want. Currently I’m hand lettering most of my comics again, and I’m enjoying taking the time to reacquaint myself with that process … which actually means less time spent cleaning scans and doing production, and more time drawing, which is a great tradeoff any day of the week!

After years of doing my own hand lettering I’ve become frustrated with how much cleanup work is required to finish my pages. Open spaces in the characters of my scanned lettering were filling in at an alarming rate, coupled with the fact that my letterforms were getting waaay too inconsistent for my tastes, led me to spend too much of my production time cleaning up individual letters. But how to retain the mark-making of my hand lettering while reducing my workload? The answer: a custom font! 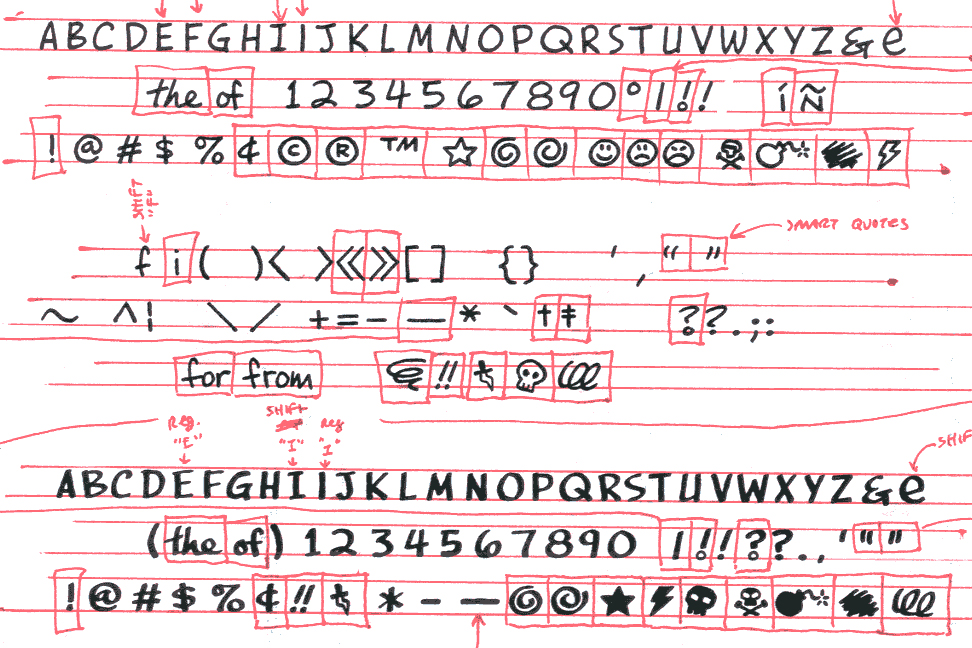 Knowing nothing about how to create a font, yet knowing that other artists (John Byrne and Jeff Smith, for instance) had done it, I took Kansas City cartoonist Mike Sullivan up on his offer to create a font based on my lettering. He did a great job with it, adapting my lettering into a full character set, a bold alphabet, and a variety of dingbats & special characters.  I was a demanding customer– I asked for a full keyboard set, including non-dialog characters like |, {, %, and + not typically used in comic lettering, but Mike worked with me to get the results I was after at a very reasonable price, even suggesting options I wouldn’t have thought of.  If you’re interested in a font of your own, and don’t know how to do it, I’d definitely recommend hiring Mike for the job.

Rather than just a collection of drawn characters, I set out to design a more consistent font than my lettering had become. I filled them out to a consistent height, balanced out the symmetry, and evened out the curves … but I may have gone too far in that direction, as I’m not entirely happy with how some of the characters turned out. Certainly not because of Mike’s translation of them, but rather because of how far I designed them away from what my lettering looks like (or at least what it looks like these days). It’s taken me a while to warm up to how the font looks after seeing my hand lettering for so long, but I’m enjoying it more and more as I continue to use it and fit it into my working method. 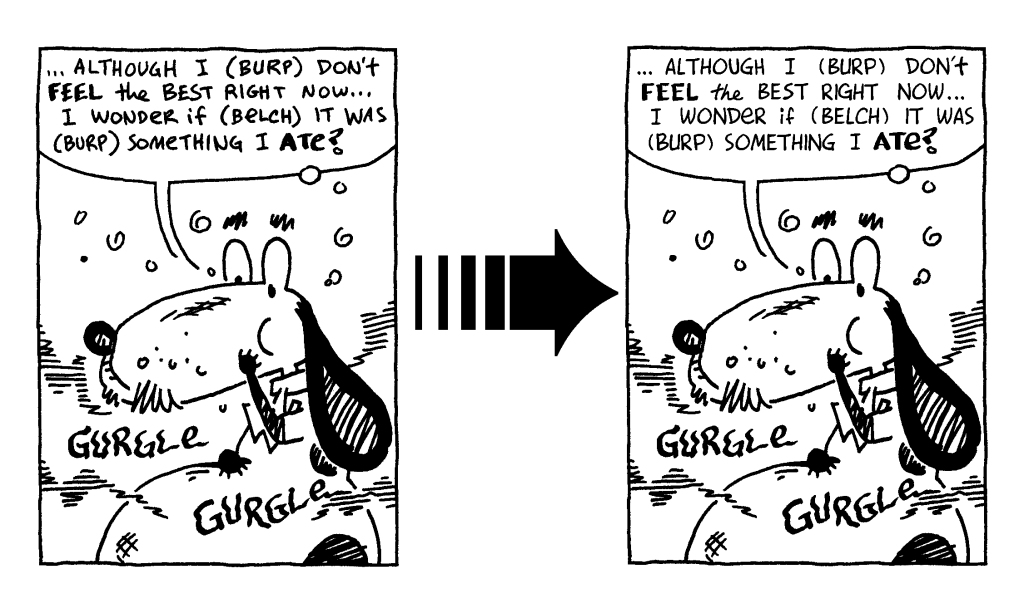 In fact, if there is any downside to the change in process, it was how little experience I had using a font before I designed mine. I wish I’d tried lettering some pages with a font first– even just as a test case– to better understand how I’d be using it in actual pages. Sadly, it hasn’t yet been the time-saver I’d hoped it would be, and I still find myself preferring some of the variety in my hand drawn lettering, especially for emphatic bolds and punctuation elements. Overall, though, I’ve been happy with the improved legibility the font has brought to my recent strips, which was the whole purpose of the change.

For years I’ve been talking up the virtues of hand lettering, and how your individual mark-making can be expressed in your hand lettering just as much as it is in your drawing style. Even for those who feel their lettering isn’t what they’d like it to be, that distinctive, hand-drawn essence adds a lot to the look of your comic pages (I’m talkin’ to you, Joel!)…

In an effort to bring some order to my own (often sloppy) lettering, I came up with this method, first shared with the public in the pages of Tim Corrigan’s Small Press Creative Explosion #16, Dec. 1998. It’s still the same method I use for hand lettering today, even if I’ve gotten looser (sloppier) with my technique since then: 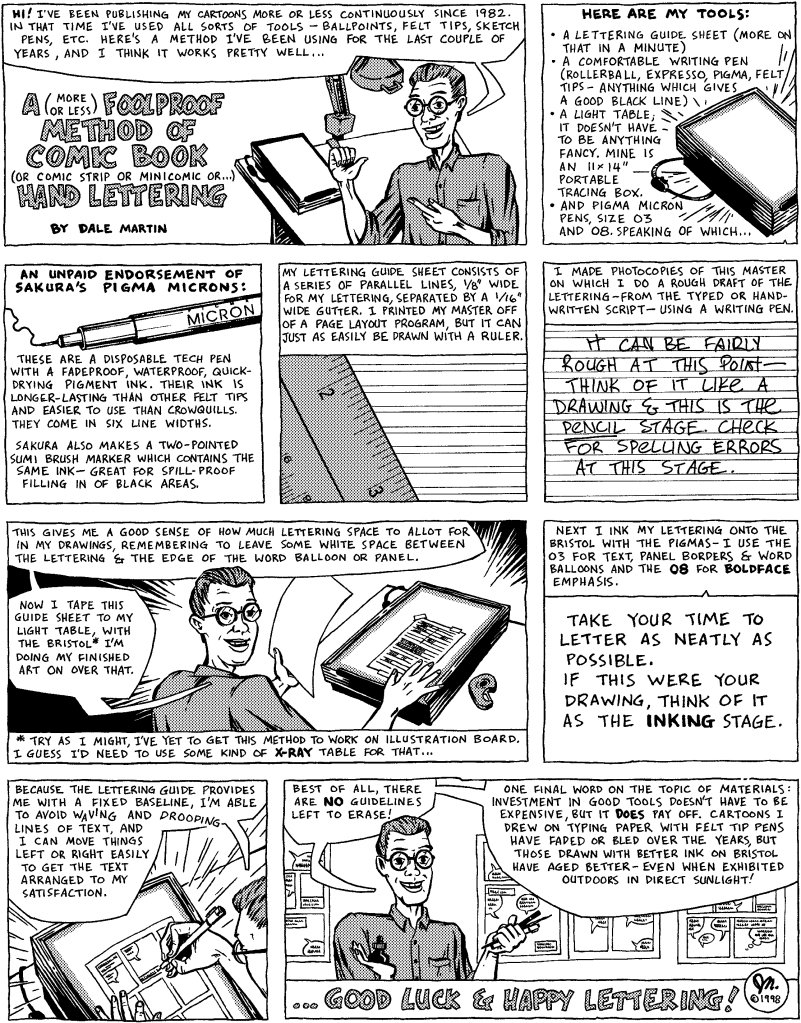 This method has served me well for a number of years and through a number of projects, though I did eventually change my pen of choice (to a fountain pen and liquid ink). But gradually– whether through inattention to detail, being able to devote less time to my art and thus rushing through it, or something else entirely– I became increasingly unhappy with not the concept of hand lettering, but with my execution of it … which is why earlier this year I began experimenting with typeset lettering in my Watusi strip.

Next time I’ll share my experiences– both pro and con– with that change in process. In the mean time, here are some links covering the art & science of comic book lettering: