After I included this image as part of my recently added Art and Illustration page, I decided to post a copy to give it a proper home here, too. I originally did this back in 2011 for Joel Pfannenstiel and Greg Smallwood‘s short-lived “Visual Audio Club” blog, in response to their challenge to translate my favorite album’s cover.

When Tom Cherry declared today “Draw Crabby Day”, I was excited by his choice. I’ve long loved Patrick McDonnell‘s expressive ink line in his daily “Mutts” comic strip, and this was a great chance to study his technique more closely. While I tried to turn it into a “Draw like Patrick McDonnell Day”, too, my character designs just don’t yield the same charm as Patrick gets with Earl and Mooch!  Thanks for a fun challenge, Tom!

(While you’re here, be sure to check out my “20 questions” interview with Tom Cherry)

Last night I had the pleasure of seeing my friend Jovarie Downing perform this wonderful song of his, and it inspired me to republish this piece I did based on it … which has to sustain me until he records a version of it:

This piece dates from a collage course I took back in 1997 taught by Lora Jost. While I really enjoyed the class, and would like to incorporate collage elements into my work, I don’t think I’m wired right to be successful with collage– I always find it easier to draw what I need than search it out. Maybe it would be easier to find images to use via the internet … except that seems kinda like cheating to me. Still, I was really happy with how this piece turned out. Lyrics to the great Jovarie Downing’s song “Railroad” are © 1997 by Jovarie Downing. Used with permission.

Happy 75th, Batman! Although why your parent company didn’t celebrate “Batman Day” on your actual anniversary escapes me…

The one-and-0nly Tom Cherry has designated today as “Draw Dollar Bill Day”! Dollar Bill was a mainstay supporting character in Marvel’s The Defenders comic, and I remember him fondly from his “Defender for a Day!” scheme from issues #62-64. Since I’ve been reading through– and enjoying immensely– Jack Kirby’s Fourth World Omnibus recently, I couldn’t help but notice the similarities between these two bearded hucksters! I broke out my brush to ink this one since I’ve got a project on tap that I want to ink with a brush; looks like I could use the practice!

As always, thanks  for the challenge, Tom! (And, no, I haven’t forgotten about Tom’s “20 questions” interview– it’s here!) 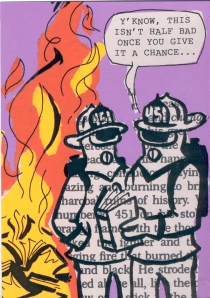 The Lawrence Public Library’s Banned Books Week trading card series is back for another year! For my entry this year I tackled another dystopian classic, Ray Bradbury’s Fahrenheit 451. Prescient digs at reality TV and social media aside, this book didn’t speak to me as deeply as Orwell’s Nineteen Eighty-Four does … perhaps because, in a move that no doubt sent Bradbury spinning in his grave, I only listened to it on audio! At least it made for a good company while I crafted this piece! However, it does lend itself naturally to the topic of book suppression. Particularly so after I learned that Fahrenheit 451, perhaps the most famous anti-censorship novel of the 20th century, was itself bowdlerized by Bradbury’s own publisher! “Some cubby-hole editors at Ballantine … had, bit by bit, censored some 75 separate sections from the novel,” wrote Bradbury in the restored 1979 edition, which had “all the damns and hells back in place.”

While I only half-jokingly told my then co-worker Mary Pawlowski that I was going to steal the collage technique she used on her 2012 entry, it turns out I kinda did– thanks for the inspiration, Mary! It was a fun change of pace to work on a piece for its purely visual aspect, and not be as concerned with panel-to-panel storytelling.

Starting today, you can pick up the first of the seven winning Banned Book trading card designs for free– just stop in the library and ask for your copy! A new card will be available each day during Banned Books Week.

The amazing Tom Cherry has designated today as “Draw a Powerpuff Girl Day”! While I never really watched their show, and don’t have an affinity for the characters, a quick search found this fun little villain of theirs– Fuzzy Lumpkins! Of course, I did the drawing and then realized I forgot to include any of the characters from the theme …  so I threw them all in! Thanks for the challenge, Tom!

Look for a terrific “20 questions” interview with Tom here ! 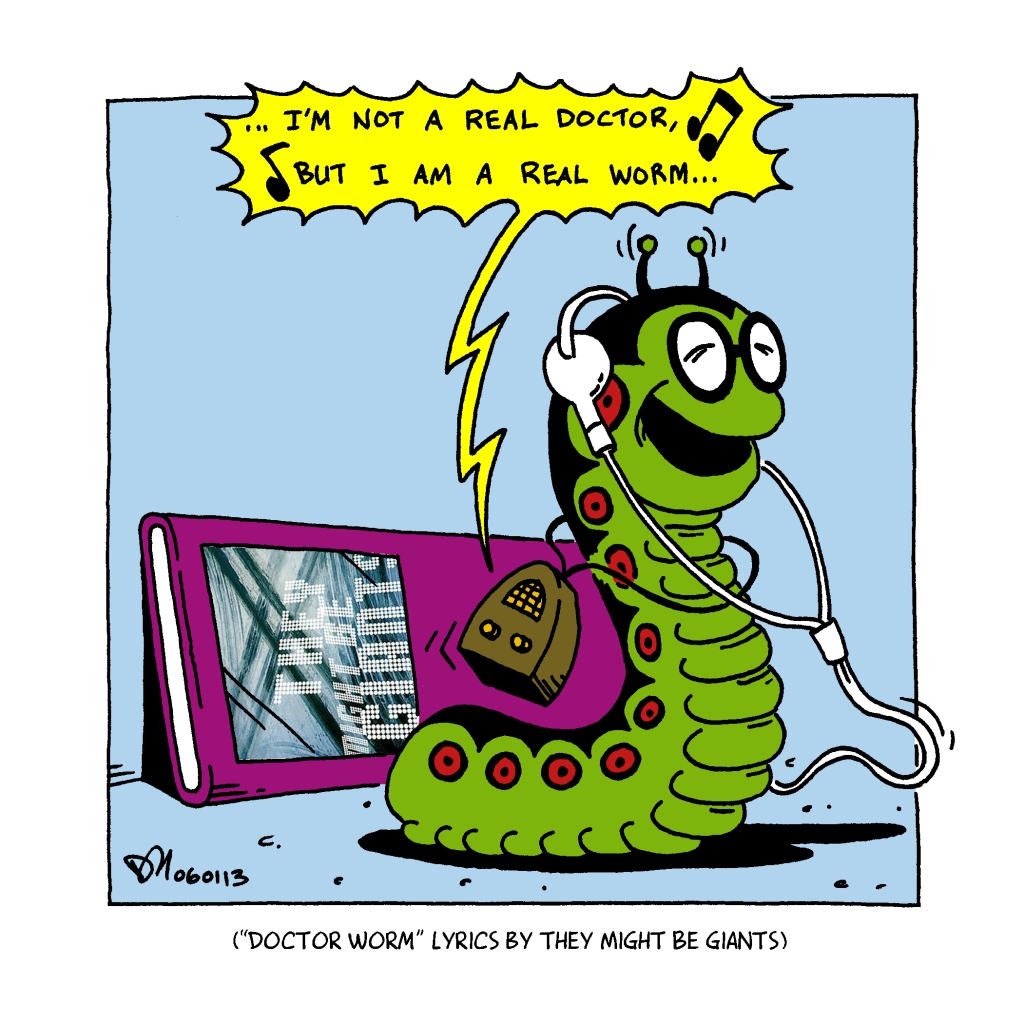 It looks like Mr. Mind in getting in the mood for this week’s They Might Be Giants show in KC by rocking out to his favorite tune! Enjoy the official video for “Doctor Worm” here.

My friend and Double Dip co-conspirator Tom Cherry is at it again, declaring today “Draw Mr. Mind Day”! This wicked worm plagued Captain Marvel and the rest of the Marvel Family, most notably in 1943’s epic “The Monster Society of Evil”. I really love the Marvel Family of characters, and miss reading new stories featuring them. While I enjoyed the original Fawcett stories, the pre-Crisis stories put out by DC, and Jerry Ordway‘s fantastic 1990’s run with the characters, they’ve fallen on hard times since then. I’ve never understood why DC can’t seem to make better use of the characters, who are so much more than the mere Superman Family clones they’re treated as.  Sadly, they’ve lost all of their unique flavor by this point, and “Shazam!” is pretty much unrecognizable in both form and tone from the character’s lighthearted origins.

Fortunately, I can always reread the back issues in my collection…

I was lucky enough to get a chance to draw as many sketches as time allowed during Saturday’s Free Comic Book Day event at Lawrence’s Astrokitty Comics & More!  Yellow writer Bobby Bierley shared a table with me drawing for comic and Star Wars fans– it was a blast! Thanks, guys!

Here are a few of my favorites from the day… 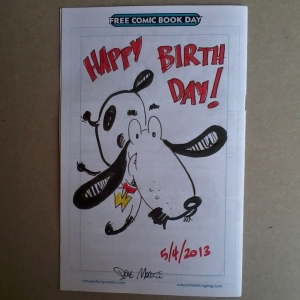 My friend and Double Dip co-conspirator Tom Cherry declared today the second annual “Draw Hiram Lodge Day”. I had such fun with last year’s festivities that I’m glad to celebrate it again. While I’m not that well-versed in how Mr. Lodge came by his fortune, I think this might be as likely a way as any. It would certainly explain all the rare and valuable antiques in his house…

Thanks again for the holiday, Tom!