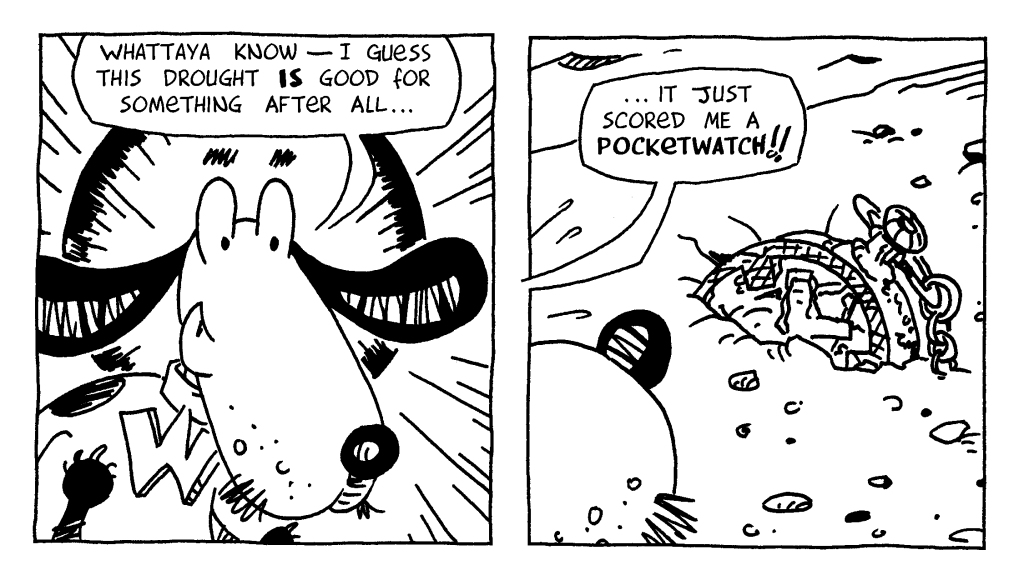 Today I’m publishing the final episode of my long (longer than I thought it would be) Watusi storyline, “The Case of the Purloined Pocketwatch”, and I wanted to give interested readers a little behind-the-scenes peek at my working method on this story. [WARNING: STORY SPOILERS ABOUND IN THIS POST. FYI.] Unlike most of my previous storylines, this one hadn’t kicked around my sketchbook much before I dived in. In fact, it first appeared less than six months before the first strips were published, with this notation:

Story idea– following ‘Sourpuss’? Done as an actual mystery (robbery, not murder) story, using clues, red herrings, suspects, etc. … if not too hard to write for that genre. May need some research into how to write for it; will probably need more planning than the seat-of-your-pants style that worked so well in ‘Isla Esmerelda’…

And of course, I did need to do research into how to write a mystery. While I’ve read a fair share of them, I’d never thought about how to construct one! By far the biggest help as I delved into this genre was Gillian Roberts’ book You Can Write a Mystery (Writer’s Digest Books, ©1999). This book was especially helpful in clarifying my thinking about red herrings (they are misdirection, not false clues), how many suspects to use, and how to play fair with the reader: present all the clues to the reader that Watusi has, but downplay them in such a way that their significance is not noticed at the time. She also had great tips that had me start the story with all the suspects in the room when Watusi first brought in the watch, and keep my dénouement as short as possible (Roberts quoted the King of Hearts advice to Alice on telling stories: “Begin at the beginning, and go on till you come to the end. Then stop.”) END_OF_DOCUMENT_TOKEN_TO_BE_REPLACED 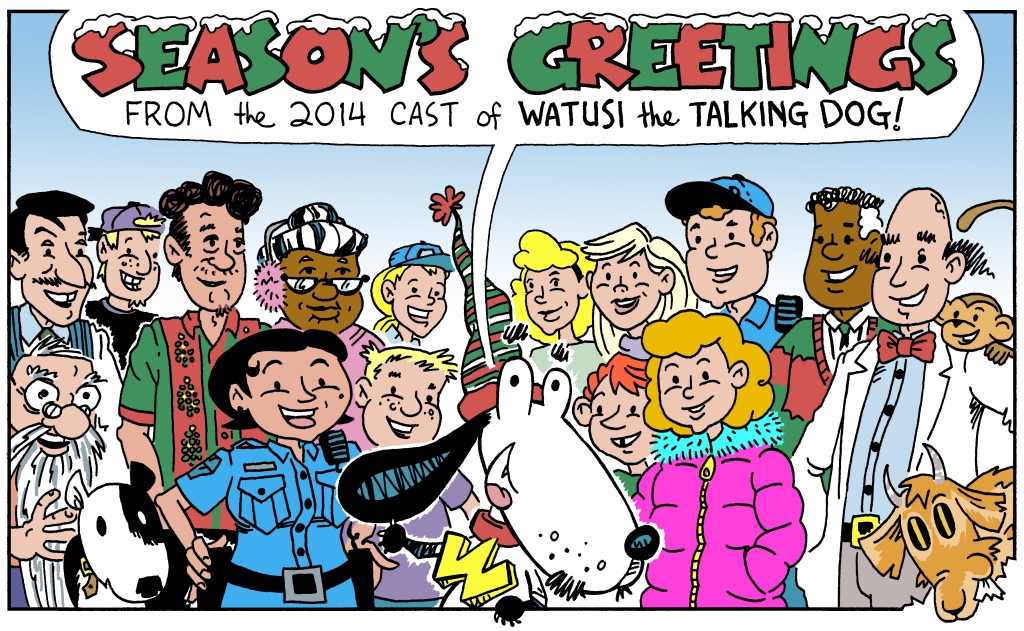 At the end of every year I send out a holiday piece to friends and family who have had an impact on my life that year (although it’s usually at the start of the new year by the time I complete them). This year I made just a plain ol’ greeting card, and thought I’d share it with my virtual audience, too. Thanks for taking the time to visit this blog or follow my weekly Watusi webcomic. It’s much appreciated!

When I write my comics, I like to have a good sense of where the action will be taking place, even it doesn’t always end up on the page visible to the reader. Case in point is the location for the current sequence in my Watusi comic strip, “Archibald’s Antiques”: 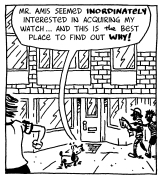 I wanted readers to see that it was a classy establishment, in direct contrast to the junk shop esthetic of Watusi’s friend Eric George’s “…Another Man’s Treasure” that played host to earlier scenes in the storyline. So I spent a bit of time to work it out before I had to draw it into a panel of the strip. Unfortunately once that time arrived, in order for the Watusi figure to be large enough to have any sense of expression, there wasn’t room to show as much of the building as I’d hoped, which is why readers saw so little of it in the strip. At least I should be able to convey a better sense of the richness of the store as the sequence moves inside beginning this week.

Still, I don’t see that prep work as time wasted, as it better informs my sense of setting, which helps me picture new sequences in my mind before I start putting pen to paper for the final art. In fact, I do this quite a lot, and often use buildings I’ve been in or pass by regularly as a source of inspiration for these locales. In this storyline alone, I’ve used a flea market I frequented when I lived in Wichita as a kid, my local senior services building, a stately house I pass by on my way to work, and a downtown shoe store (mixed with elements of an antique mall in downtown Topeka).

My original mixed media (watercolor, color pencil, laser print) drawing of “Archibald’s Antiques” was displayed in last fall’s Drawing Frenzy exhibit in KC, but for those of you who missed it, here it is once again: 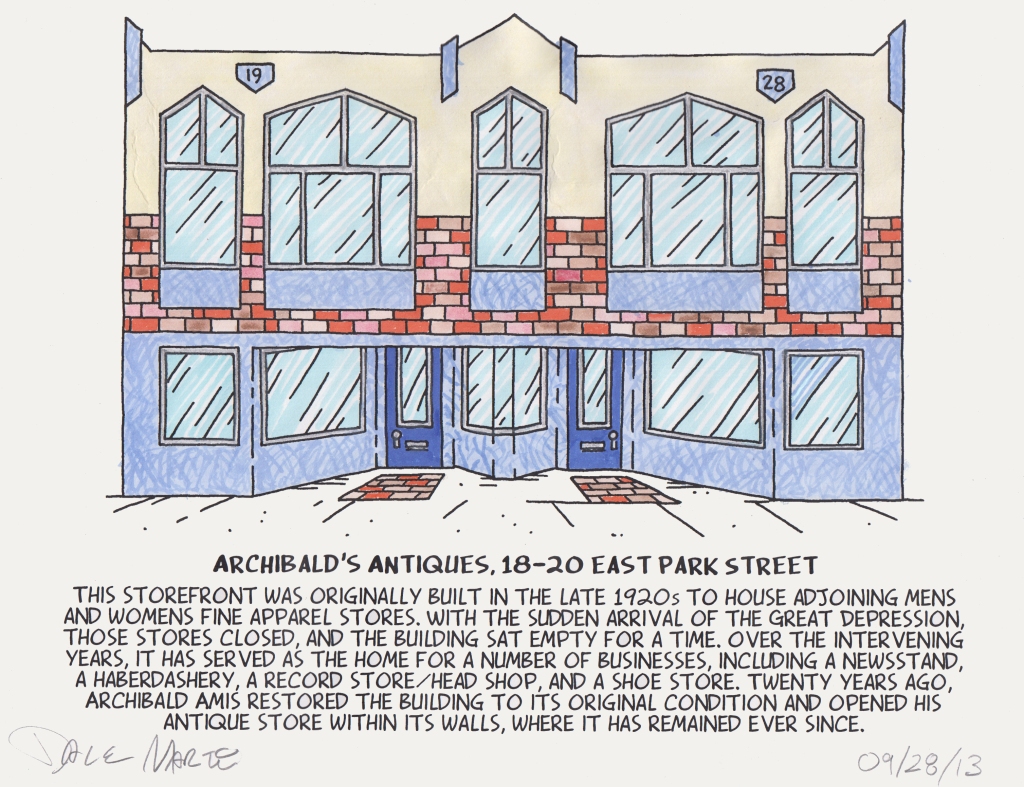 Back in the halcyon days of yore I used to “interact” with my characters a lot more than I do these day. While I really enjoy writing about characters other than myself, my recent sidebar feature in Lawrence Magazine gave me the perfect chance to do that once more. Even though it took me a lot longer to finish my self-portrait than it did for Jason Dailey to work his photographic magic for that issue, it was still good inking practice for me, since I use a brush so seldom these days… 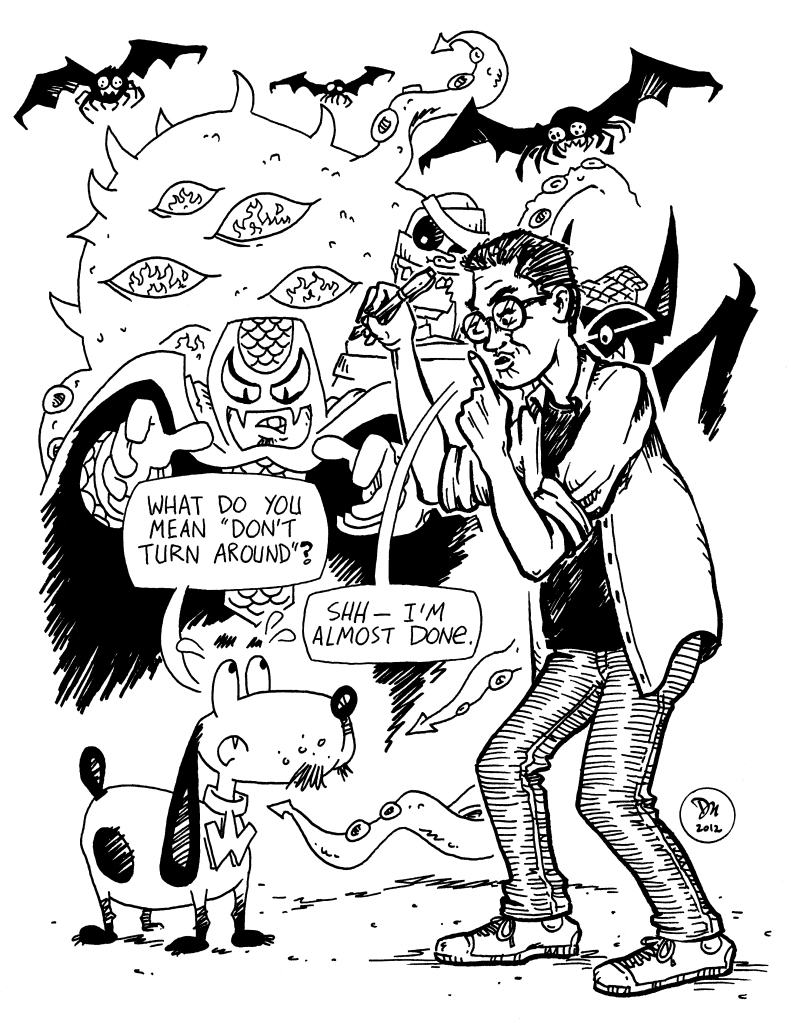 Honestly, I actually like the photo a lot better; it has a nice Out of the Inkwell vibe going on…

The article’s author, Julie Tollefson, asked a nice batch of questions, and I thought it’d be fun to share the full interview here, too: END_OF_DOCUMENT_TOKEN_TO_BE_REPLACED 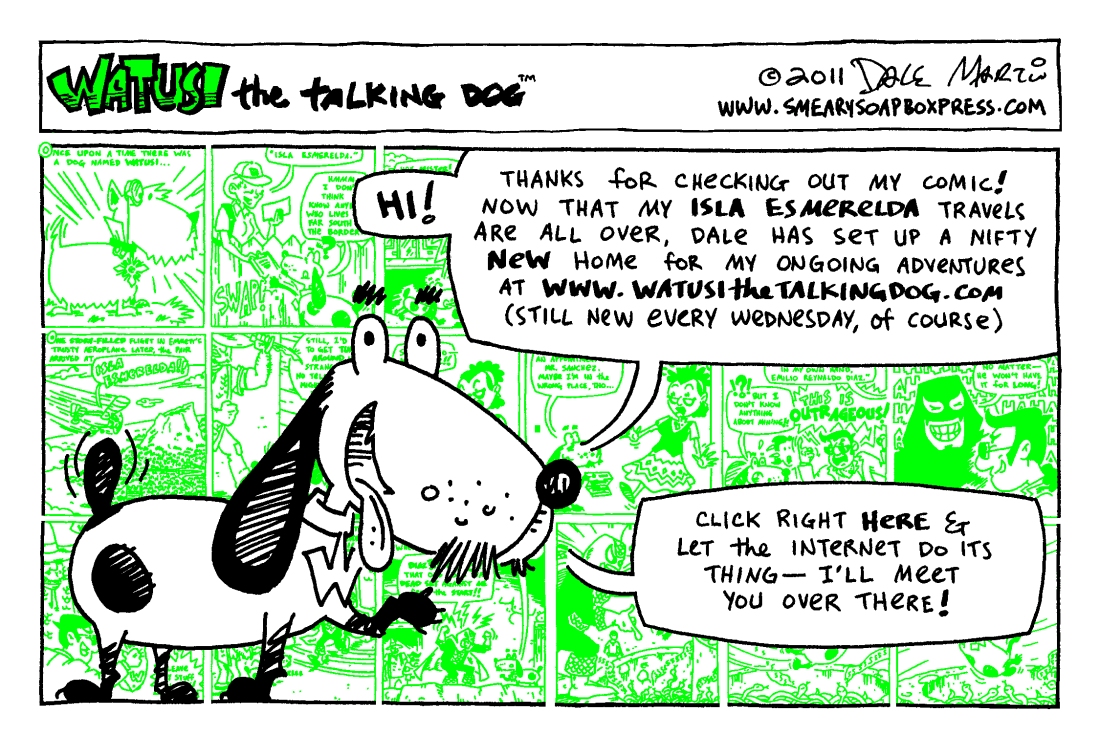 Yes, I’m going to start making better use of my urls, so the Watusi strip is moving to www.watusithetalkingdog.com.

What does that mean for http://www.smearysoapboxpress.com? Nothing for the time being, as I’m leaving the Isla Esmerelda storyline here for a while to catch latecomers. After that? Well, I’ve got a thing or two in mind…