This month marks the tenth anniversary of my last “Larry’s Kitchen” zine as a part of APA-5, the world’s finest APA!

An APA (or Amateur Press Association, for those of you who don’t know) is a group where individual members create their own zine, send it to a central mailer who assembles them all into a single publication and redistributes it to the members for comment and enjoyment. APA-5 was a great environment for me at a time when I felt disconnected from other cartoonists, and wanted feedback on my work. For over seven years I was an active part of this group of amazing creators, including Drew Boynton, JB Winter, Larned Justin, Mike Leuszler, Michael Munshaw, Brien Wayne Powell, Dan Lauer, Tom Davidson, Steve Willhite, and others.

I was happy with much of the work I created while in APA-5, and enjoyed it as a venue to share work in progress with other creators for feedback. In the years before social media posts and “likes” became the accepted way to interact online, we were able to get into meaty discussions and give thoughtful critiques of work in the pages of APA-5. As it became easier to communicate virtually it took its toll on that level of discussion, and it soon felt like the writing was on the wall for not only APA-5, but a few years later to the Small Press Syndicate’s Rap Sheet as well. While I was only able to get in on the tail end of the storied histories of both APA-5 and the SPS, I treasure the time I was able to spend as part of those groups. Not only for the improvement it brought to my work and my work ethic, but for its sense of camaraderie with fellow creators, many of whom I still collaborate with from time to time today.

The work in my 77 “Larry’s Kitchen” zines (+ assorted jams and other projects) remains largely unscanned, and unshared beyond the active membership at the time. In fact, that was one of the reasons that I moved Larry’s Kitchen into its own freestanding digest format comic in 2006– so I could share it more widely, to creators and readers not part of the group. Unfortunately, my situation at work changed, and after two more issues I didn’t have the time to commit to both Larry’s Kitchen and my Watusi projects. One had to go, but I think I chose wisely.

Of course, APA-5 had been going strong for over a quarter of a century before I joined and it went on for a number of issues without me. Among its storied roster of past members are names familiar to fans of comics and television: Mark Verheiden (who founded the group in 1972), Paul Chadwick, Frank Miller, Chris Warner, Randy Emberlin, Cliff Biggers (Comic Shop News), Mike Richardson, Tak Toyoshima (“Secret Asian Man”), Bill Nichols, Sheila Wilding, Robin Ator, Brad Kurtz, Mark Badger, Michael Monasmith, and many, many more.

While APA-5 as I knew it may be gone, it exists online here and here, and carries on in spirit in the pages of T. Davidson’s Fiver Fun Comics. Below are glimpses from a few of my favorite APA-5 moments from 1998-2006… 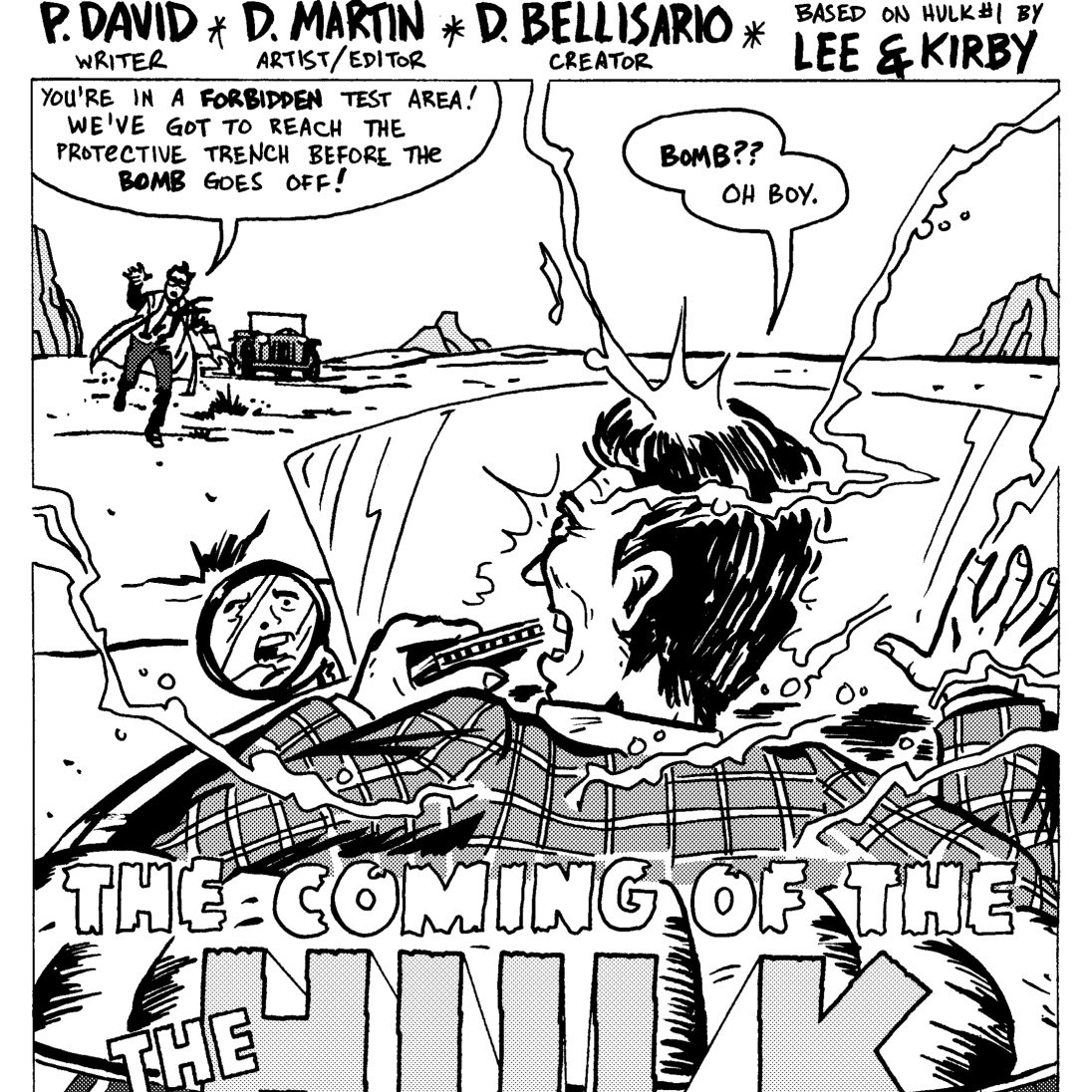 For our “Revision” theme issue, I pitched a version of Quantum Leap set in Marvel (or DC) continuity. The Booster Gold series of 2007 played with some of that same story potential; Sept. 2003. 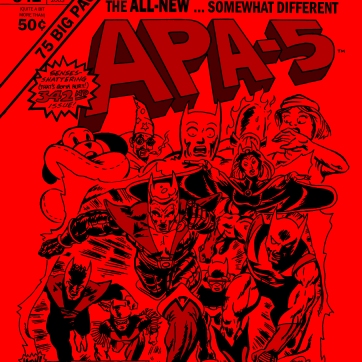 This was the cover to my first issue as Central Mailer; June 2003. 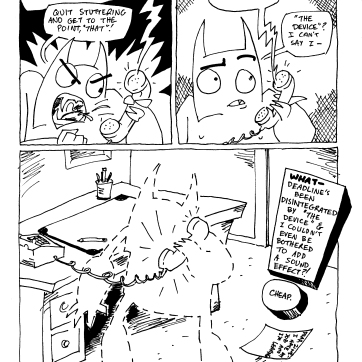 For one of my turns on the Deadline jam comic I produced a 24-hour comic; June 2000. 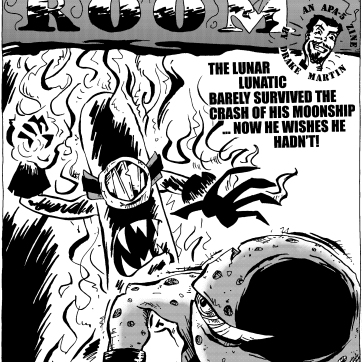 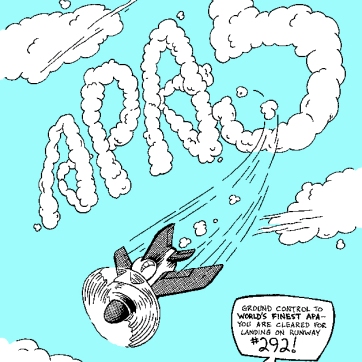 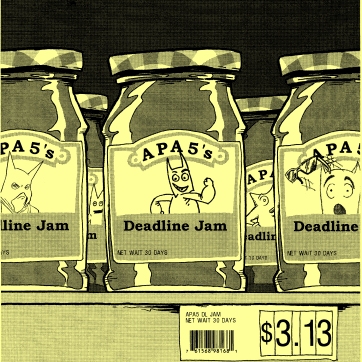 In addition to my art, this cover incorporated the art from other participants in our ongoing Deadline jam comic; Jan. 2001. 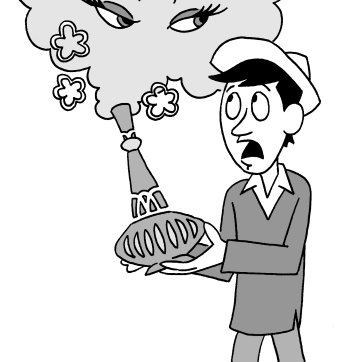 An illustration inspired by Kim Metzger’s idea for a Jeannie/Gilligan crossover; Feb. 2005. 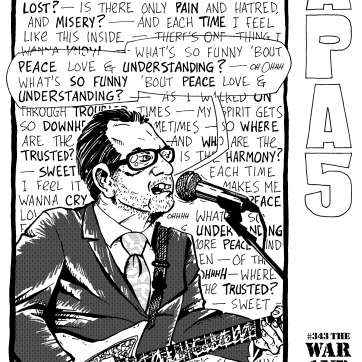 This “peace” interior “cover” for our “War and Peace” theme turned out better than my “war” effort; July 2003. 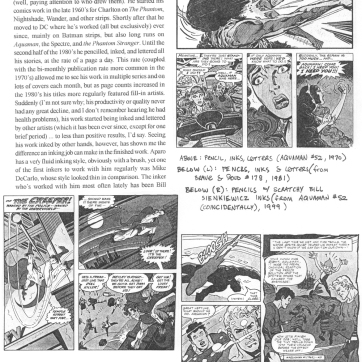 I ran this page sharing the influence Jim Aparo had on my art during our “Influences” issue in July 2000, and again in Aug. 2005 following his death. 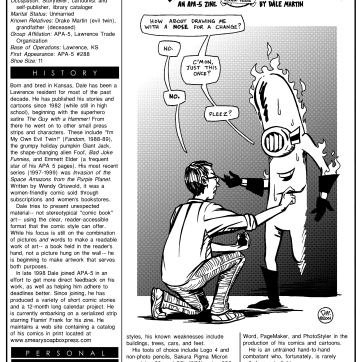 For occasional introductory pieces, I fell back on the style of DC Comics’ “Who’s Who” entries; this was my second one, from March 2001.

6 thoughts on “It really was “The World’s Finest APA”!”