It was 15 years ago this August that Watusi made his first print appearance, inside my Larry’s Kitchen zine in APA-5 #308! Little did I know what impact that tossed-off concept would have on my career, becoming not only the character I’m most associated with, but one that has helped me make collaborative connections with artists all over the country, some that go well beyond one panel in one of my jam comics. Best of all, Watusi is a character that I’ve not grown bored with, and I feel like there are a lot more stories I can tell using Watusi and the cast of characters that have developed around him! Here is the very first Watusi one-pager I ever did:

In addition to my one-pager, APA-5 #308 also featured the first trial jam comics, featuring work by JB Winter, Larned Justin, Drew Boynton, and Steve Willhite, who generously acted as guinea pigs to see if my project could work. As I’ve written before, Watusi was initially developed (though “developed” is a stretch– the character design, logo, and first strip were all done in about an hour!) as an experiment in quick storytelling for classroom use. Back in 1999 I had the chance to teach two workshops on cartooning to junior high school students in which I’d been asked to talk about what I do, look at any student work they brought, and give them an assignment to work on (too much to fit into one class period, I thought). So to prepare for the next time I did something like that, I wanted to be ready with a simple hands-on activity for the students: a way for them to complete a comic during a single class session. Students would draw just one panel at a time, then exchange it with a classmate to build a story in a (hopefully more or less) logical manner, without worrying about the whole story or becoming frustrated by a blank page. I was later able to try this technique out in classroom settings and library workshops, and it was surprisingly successful.

As much as I enjoyed using the character in those situations– as well as in collaborations with other cartoonists in stories that fill so many pages of my Watusi the Talking Dog digest series– I have been most pleased and surprised by how easily that little dog made the transition into longer stories, as seen in my ongoing Watusi webcomic. The character has a versatility that allows me to use him in all kinds of stories: science fiction, mystery, adventure, humor… pretty much anything I want to try my hand at. It may have been 15 years already, but Watusi feels like a character I can continue to enjoy for many years to come! Hopefully you can, too… 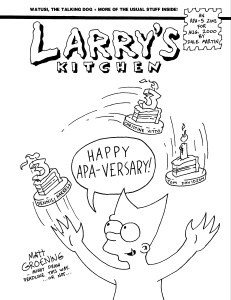 While I haven’t written a lot about the influence APA-5 had on me, it was a great environment to work in for a number of the years I was involved in the group (1998-2006). At its best, it was a really liberating place to play around with different kinds of stories & drawing styles, and give and get feedback from like-minded creators. Participating in the ongoing round-robin jam comic featuring our mascot Deadline (created by Paul Chadwick when he was a Fiver), and the challenge of theme issues that would spur my thinking in other directions were just some of the benefits I got from my years there. Over time, more prose writers came aboard and the feedback I could give and get became less useful, so I decided to “graduate” to my own circle of peer cartoonists. About the same time, though, I also took on full-time hours at my library job, which pretty much derailed that plan…

Of course towards the end of my time there, the internet was also becoming a more dominant way for people to meet and connect over similar interests, and helped usher in the end of many Amateur Press Associations. Yet for all the ease those connections provide (and which I benefit from every day), they don’t seem to create the tight-knit connections that developed among us Fivers back in the day, when we thoughtfully read and commented on the work of our peers in the pages of APA-5.

As a side note, Tom Davidson (APA-versary #1 in my “Larry’s Kitchen” cover above) is attempting to revive some of that spirit in his Fiver Fun Comics; contact him for more information.

7 thoughts on “Watusi: 15 years and hasn’t stopped talking yet!”