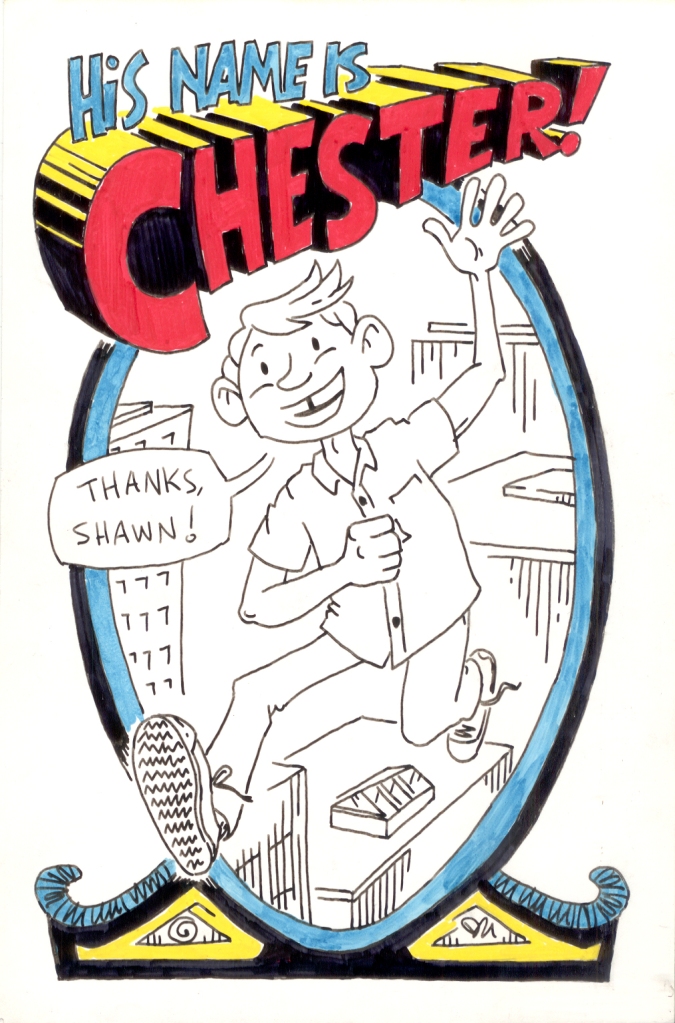 At long last, I’ve finally decided on the name for this character: “Chester”. Thanks to Shawn Geabhart for suggesting this winning name!

When I first announced this contest, I figured I would pick the name out on October 21, following the end of the contest, and announce my choice right away. What I didn’t expect was how hard it would be to choose that winner! I got nearly 30 suggestions between this site, Watusi’s facebook page, and my September and October conventions. Some were easier to eliminate from the running than others, but I was left with 10 real possibilities, then a tough top four– Denton, Alan, Owen, and Chester– to mull over for a while. The really interesting thing about all this– but the thing I was hoping would happen– was how none of them were names I would have come up with on my own, and they didn’t really fit my expectations of what that name might look like, either. But “Chester” feels right for the character.

Why Chester? What finally swayed me was how the “Ch” sound paired with “Chuck”, though the initial vowels in “Alan” and “Owen” had a certain appeal in how they would have paired with “Emma”.

Thanks to everyone who contributed ideas; I really appreciated them! And your chance to win isn’t over yet: when Watusi #30 is finished, I’ll do a random drawing for three winners– one from my online entries, one from Project: Comic Con entries, and one from Free State Comicon entries– to receive a copy of that issue.